With over 3,500 mosquito species worldwide, finding effective methods of how to kill mosquitoes and gain mosquito control over the population is no easy task and while Mosquito Traps have been proven to effectively reduce the mosquito population, even the best mosquito traps on the market still require a certain level of knowledge and know-how to completely serve their purpose. To ensure that your mosquito trap is achieving the highest catch rate possible and operating to its full potential, follow these tips and tricks for mosquito trap optimization.

A crucial factor in achieving high catch rates from your SkeeterVac, Mosquito Magnet or other mosquito trap is proper placement. Mosquitoes breed, rest, and dwell in shady, damp areas and with the exception of the Asian Tiger Mosquito, they avoid direct sunlight. For the best level of protection against mosquito bites, your mosquito trap should be placed in a shady, slightly sheltered area and preferably amongst bushes and shrubs or near wetland areas if you have them. Mosquito traps should be placed in areas that are not frequented by humans or animals and upwind of the primary breeding area where the attractants can lure female mosquitoes into the trap and effectively kill mosquitoes.

Remember:Mosquito trap placement can sometimes be a method of trial and error. If one spot isn't working the best to get rid of mosquitoes, move the trap and try a different area. You should also keep in mind, it may take as much as 6-8 weeks of use to reduce local mosquito populations to the point that breeding cycles are interrupted, so be patient.

How often you operate your mosquito eater could depend on a few different factors.  Follow these guidelines to determine effective operating cycles. 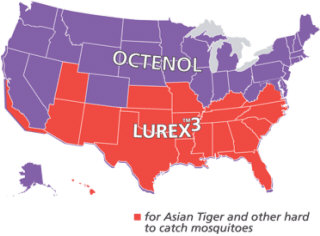 In most cases, Octenol is the primary attractant used in mosquito traps to attract mosquitoes. Octenol is a secondary attractant that simulates human breath and will attract most mosquito species as well as sand flies, black flies, and biting midges. Most mosquito traps like the Skeeter Vac and Mosquito Magnet are also Lurex compatible. Lurex is a secondary mosquito attractant that mimics skin emanations and will attract hard to catch day-biters like the Asian Tiger Mosquito.

Using a CO2 powered mosquito trap will increase your capture rate by up to 300-400%. This is possible because the mosquito trap produces CO2 in regular intervals to mimic a human or animal host using CO2 and moisture as attractants. Also, certain mosquito trap models use the heat from this process to create electricity so you don't need batteries or power cords (most models) so trap placement is not limited. SkeeterVac mosquito traps and Mosquito Magnet traps are two very effective trap models that are cordless and powered by propane.

If your mosquito trap has a bug container for example, you can increase your catch rate by adding a little water to the bug container and adding 3-4 drops of a sugary solution to it. You can use soda pop, sugar, or any household sugar based item that mosquitoes will identify as a source of energy. The mosquito trap is able to use the sugary solution as an attractant because the airflow from the trap is humidity enriched, much like human breath, and contains traces of sugar. This trick won't work with the Mosquito Magnet or SkeeterVac models.

For the most part, mosquito traps don't really require a lot of attention and maintenance. Besides making sure that your mosquito trap is supplied with power, you will need to make sure that propane and Octenol is properly supplied and that the fans are turning and clear of debris. Depending on which trap model you are using, you will need to empty the bug bag or bug container, replace the adhesive board or clean the electric grid. At the end of the mosquito season, immediately store your mosquito trap inside and wrap the head of the trap in a garbage bag to keep out spiders, wasps, and other nest-making insects. These nest-making insects can get into the inner workings of your trap and make it difficult to start in the spring.

Reducing breeding sources around your property will reduce mosquito bites and also increase the catch rate and effectiveness of your mosquito trap and help you get rid of mosquitoes. Keep swimming pools clean and change the water in bird baths, wading pools, rain barrels and other stagnate water sources once a week. For ornamental ponds, consider an aerating water pump that will create enough water current to discourage mosquitoes from breeding. Remove any standing water from old tires, cans or other sources. If the water cannot be removed like in a hole or swampy area use mosquito dunks or bits to treat the water and kill mosquitoes. There are also a lot of electronic pest control items such as handheld bug zappers and indoor mosquito traps that will help you get rid of any stray mosquitoes that haven't made it to the mosquito trap yet.

Now that you know how to increase the effectiveness and catch rate on your mosquito trap, we hope that this advice on mosquito trap optimization will continue to help you throughout all of your Mosquito Control efforts.