SkeeterVac FAQs - Northline Express
Invest in Online Stores, Inc. The future of niche retail - Visit us at StartEngine.com
Free Shipping on $99 Or More
Need help finding the right chimney pipe? Try our Chimney Wizard today!
Due to the massive east coast snow storm, UPS, FedEx and all other carriers are experiencing significant delays. All orders placed, including expedited orders, will be delayed by 1-2 business days. We apologize for the inconvenience.

Use this list of SkeeterVac FAQs to assist you with set-up, operation, trouble shooting and basic everyday use of your SkeeterVac mosquito trap. These frequently asked questions and answers will help you gain mosquito control and achieve the highest catch rates with your SkeeterVac. They will also provide useful information that will keep your trap operating to its fullest potential throughout the mosquito season.

Learn how to properly store your SkeeterVac during the off season, where to find SkeeterVac replacement parts, and mosquito trap placement tips in this SkeeterVac FAQ article.

1.Question: How does the SkeeterVac work?

Answer: SkeeterVac mosquito traps are cordless units that create their own power to attract, trap, and kill mosquitoes. Skeeter Vac traps power themselves by converting propane into electricity through a catalytic conversion system. Once the conversion process is complete, warm CO2 is created as a by-product from propane and released from the trap by the exhaust from a powerful fan. The CO2 along with octenol attractant, heat, moisture, and a combination of LED lights allow the SkeeterVac to mimic a blood host and lure the mosquitoes toward the trap. As mosquitoes approach the trap, some will get stuck on the sticky TacTrap surrounding the engine of the SkeeterVac while others will be vacuumed inside of the trap and collected in the WaveDrawer. Mosquitoes that collect on the TacTrap and in the WaveDrawer inside of the SkeeterVac are killed by dehydration.

2.Question: How much does the SkeeterVac cost to operate?

Answer: When operated 24 hours/day, 7 days/week as directed, SkeeterVac mosquito traps typically cost less than a dollar per day to kill mosquitoes on your property.

3.Question: Why is the SkeeterVac powered by propane and why is that important?

Answer: Using propane allows SkeeterVac models to operate as cordless units. This is because when clean burning propane is processed through a catalytic conversion system you get warm CO2 and moisture as a by-product. SkeeterVacs use the heat from the conversion process to create electricity so you don't need batteries or power cords to operate the mosquito trap. Cordless mosquito traps are preferred because you can place them anywhere and the trap will operate more efficiently without service interruptions. The warm CO2 produced through the catalytic conversion process also plays an important role in drawing mosquitoes to the trap because they are attracted to the warmth and CO2 released by a host.

4.Question: Can the SkeeterVac be used indoors and outdoors?

Answer: SkeeterVac mosquito eaters are strictly for outdoor use. They are not to be used indoors for any reason. You can store your Skeeter Vac in a shed or garage during the off season, but the propane tank must be disconnected from the trap for safety precautions.

5.Question: Is the SkeeterVac noisy?

Answer: Skeeter-vac mosquito killers operate very quietly. The fan on the SkeeterVac produces a very light hum that is difficult to hear from a few feet away.

6.Question: Does the SkeeterVac produce an odor?

Answer: The only odor that the SkeeterVac produces is from the attractants which is very subtle and difficult to detect.

7.Question: When should I turn my SkeeterVac on and off?

Answer: SkeeterVac traps provide the most effective protection against mosquito bites when operated 24 hours/day, 7 days/week during the mosquito season. If the trap is only used part time, it will allow mosquitoes to repopulate. Also, different species of mosquitoes have different feeding patterns so throughout the day and night so round the clock operation will provide the best mosquito control during the mosquito season.

8.Question: How warm does it have to be for me to start my mosquito trap?

Use this map mosquito season map as a guideline to begin operation of your Skeeter vac. 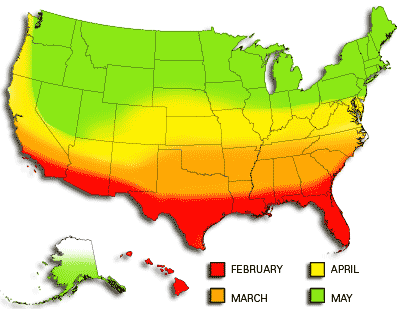 9.Question: How much area does the SkeeterVac cover?

10.Question: What are the different SkeeterVac models?

11.Question: What attractants does the SkeeterVac use?

Answer: SkeeterVac traps use warm CO2, heat, moisture, and octenol to attract mosquitoes to the trap. Both SkeeterVac models are also Lurex3 compatible to catch aggressive day biters like the Asian Tiger mosquito. Both the SV3100 and SV5100 SkeeterVac models use a FineTune BaitBlock system that adapts to the trap's specific outdoor environment and allows the octenol and Lurex3 to be released in 5 different intervals in lesser or greater amounts. Once adjusted for the area, SkeeterVac catch rates will increase.

12.Question: When should I change the attractant in my SkeeterVac?

Answer: SkeeterVac attractants will last for about 60 days. After 60 days of operation, the octenol and or Lurex3 will need to be replaced in your SkeeterVac.

13.Question: How long will a full 20 pound propane last while operating my SkeeterVac?

Answer: During normal 24/7 operation, a full 20 pound propane tank will provide about 21 days of protection against mosquitoes. It';s a good idea to have a full back up tank on hand that way when one is emptied, you can hook the full one up immediately without any breaks in operation. We recommend that you not let the propane tank run entirely out as doing so can pull debris from the tank into the engine and clog the fuel lines.

14.Question: Why should I purge my propane tank before using it with my SkeeterVac?

15.Question: How often should I change the sticky TacTrap on my SkeeterVac?

Answer: Change the sticky TacTrap on your SkeeterVac when it is 80% covered with dead mosquitoes.

16.Question: Where do mosquitoes collect in the SkeeterVac?

Answer: Skeeter-vac mosquito traps have a WaveDrawer inside of them. Mosquitoes are drawn into the WaveDrawer by a powerful fan where they eventually dehydrate and die inside of the SkeeterVac.

17.Question: Are all SkeeterVac models cordless?

18.Question: Where should I place my SkeeterVac?

Answer: Mosquitoes rest in shady, cool areas. Female mosquitoes also need standing water to lay their eggs which is why water sources are mosquito breeding areas. Mosquito traps should be placed in or upwind and as close to mosquito breeding areas as possible. If you don't have any breeding grounds on your property, place your SkeeterVac in a lightly wooded, cool, shady area. Traps should be placed at least 30 feet from your living area where they can draw mosquitoes away from areas that are frequented by you, your family, and your pets. It may take trying a few different locations to achieve the highest catch rates with your SkeeterVac. To see a diagram and further placement instructions, see our SkeeterVac placement article.

19.Question: How often should I empty the WaveDrawer on my SkeeterVac?

Answer: SkeeterVac Wave Drawers should be emptied after 30 days of operation.

20.Question: Will my SkeeterVac kill other insects besides mosquitoes?

Answer: Yes. SkeeterVac mosquito traps will also attract and kill black flies, gnats, no see-ums, and any other biting insects that are attracted to humans and animals.

21. Question: Why won't my SkeeterVac start this spring?

Answer: If you are having trouble starting your SkeeterVac in the spring time after it has been stored away in the off-season, the following problems may be the cause of your SkeeterVac start-up issues. Also see SkeeterVac Maintenance and Manuals.

Problems with start-up in the spring most commonly occur from spiders, wasps, bugs, or other insects crawling into the SkeeterVac while it's not in use and building nests or webs which can clog the system. Follow the instructions for storing your SkeeterVac during the off-season to prevent bugs from clogging the system.

Start-up problems will also occur with the SkeeterVac is the flame has blown out. The orifice that supplies gas to the SkeeterVac is very small and overtime can easily accumulate enough residue to blow the fame out. Using the Quick Clear Cartridge will clear the engine fuel orifices.

Another reason you might have trouble starting your SkeeterVac in the spring could be due to moisture build up in the engine if the trap has been stored in a damp area. If this is the case, set the trap in the sun and allow several hours for it to dry out.

22.Question: How should I store my SkeeterVac in the off-season?

Answer: At the end of the mosquito season, clean out your SkeeterVac, disconnect the propane tank, and cover the trap head and regulator hose with a plastic garbage bag. Be sure that you wrap the bag tight to prevent insects from entering the trap and clogging the fuel lines. SkeeterVac traps should be stored in a garage or shed during the off-season.

23.Question: Water drippings have collected on my SkeeterVac. Is that normal?

Answer: Yes. Condensation can gather on the SkeeterVac when it is operating on humid days. The drips are simply water vapor which is a by-product of the catalytic conversion of propane and oxygen to carbon dioxide. The water vapor is caused by atmospheric temperature differentials and will not harm the SkeeterVac, nor impede the SkeeterVac's operation in any way.

24.Question: Can my SkeeterVac be used in the rain or with sprinklers?

Answer: Skeeter-Vac mosquito traps are designed to operate under normal moisture conditions, including rain and sprinklers. However, sprinklers should not be aimed directly at the SkeeterVac and if severe weather conditions are predicted, the SkeeterVac should be removed and stored out of the weather.

25. Question: Where can I find replacement parts for my SkeeterVac?

26.Question: Is the SkeeterVac harmful to me or my pets?

Answer: Children and pets should not be allowed to play around the SkeeterVac simply for the fact that is draws mosquitoes into that area which is why placement instructions say to place the trap in areas that are not frequented by humans and animals. The operation of the trap and mosquito trap itself is not at all harmful to pets or humans. We do suggest that you take care when handling attractants by washing your hands afterwards.

27.Question: Can I use a propane tank larger than 20 pounds for my SkeeterVac?

Answer:  No. It is not recommended that you connect a tank bigger than 20lbs to your SkeeterVac because it will cause internal problems with the igniter and switch and the warranty would be voided once it is returned for repair.

28. Question: Should I still practice other mosquito control methods even if I'm operating my SkeeterVac?

Answer: Absolutely. Mosquito traps are very effective at killing mosquitoes but the simple fact is that no one method of mosquito control alone can kill every single mosquito out there. If you have water sources on your property, Mosquito Bits and Mosquito Dunks should be used to be sure that mosquitoes are breeding in stagnate water. AllClear Mosquito Misters are effective at killing mosquitoes on your property on contact with concentrated mist solutions. Mosquito Barrier will as lo effectively get rid of mosquitoes on your property as it is made with 100% garlic extract which is known to be lethal to mosquitoes and other soft bodied insects. When mixed with soybean or canola oil, Mosquito Barrier will also kill mosquito larvae in water sources by creating a thin film on the water's surface that suffocates mosquito larvae. Mosquito repellents like the ThermaCELL Mosquito Repellent Appliance should also be used during any outdoor activities.

We hope this SkeeterVac FAQ article has answered all of you mosquito trap questions, and will help you gain mosquito control over your property once and for all!