Free Shipping on $99 Or More
Shop for Face Masks and other Personal Protective Equipment at Discount Safety Gear.com

(No reviews yet) Write a Review

Purchase the Bundle and Save! This bundle is priced $20 Less than purchasing individually!

Purchase the Bundle and Save! This bundle is priced $20 Less than purchasing individually!

Get 1.5 acres of protection with the SkeeterVac SV5100 Mosquito Trap and Accessory Bundle. This wonderful bundle gives you everything you will need to start protecting your yard in a matter of minutes. 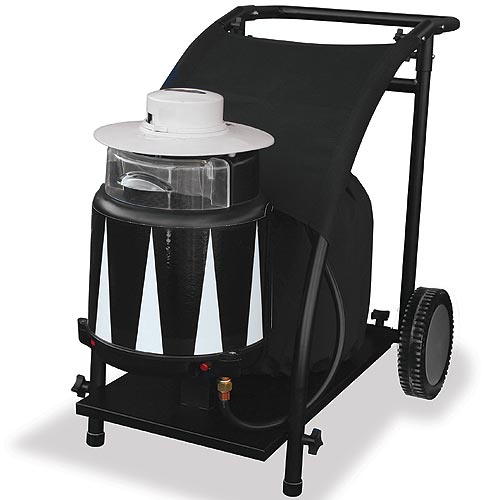 The SkeeterVac SV5100 is a cordless unit that creates its own power to energize the suction fan by converting propane to electricity using a catalytic converter. Once it is ran through the catalytic converter, the propane by-product is CO2. When the fan powers up, the exhaust from the fan blows CO2 and Octenol out of the unit along with heat and moisture. Mosquitoes are drawn to the mixture thinking it is a mammal. Some mosquitoes will get stuck on the sticky TacTrap which is the black and white portion of the trap surrounding the SV3100 engine. Mosquito research has shown that mosquitoes are attracted to dark colors. The design of the TacTrap with the white and black contrast tends to make mosquitoes fly toward the wider dark portions of the TacTrap which is where the suction from the fan pulls the mosquitoes into the permanent wave drawer where they dehydrate and die.

SkeeterVac is the only product on the market to provide attractant customization to specific outdoor environments. Different species of mosquitoes and different physical locations may require a lesser or greater amount of Octenol output. The FineTune BaitBlock system allows for 5 different settings to vary the amount of Octenol output. Each FineTune BaitBlock will provide 60 days of mosquito protection

The SkeeterVac's exclusive Flight Guide TacTrap uses contrasting colors (black and white) to attract mosquitoes as well as direct them toward the fan. Tabs are located at the top of the TacTrap for easy. Replace the TacTrap when it is 80% to 90% covered with mosquitoes or other biting insects. Each box contains 2 TacTraps, each TacTrap will last approximately 2 weeks. You may need to replace yours more or less often, depending on your particular mosquito population.