Mosquitoes have been around for centuries and it's pretty evident that they're not going anywhere. While it may be impossible to completely get rid of mosquitoes, there are things you can do to gain mosquito control and protect yourself and your loved ones against painful, itchy, disease-spreading mosquito bites. 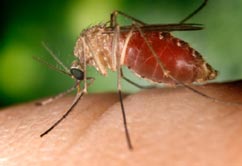 What attracts mosquitoes to you?

There are a lot of different explanations for why a mosquito might bite one person instead of another in the same environment. The strength of different scents released from person to person can cause some people to have greater chances of being bitten by mosquitoes than others. Approximately 340 different kinds of chemical scents emitted by human skin attract mosquitoes but there are also other scents and physical motions that make us prone to mosquito bites.

Why do mosquito bites itch?

The saliva that the female mosquito leaves behind and its anticoagulant properties is what actually cause the itching and swelling of the mosquito bite. Studies show that while not all of us have allergic reactions to mosquito bites, the majority of us do have a small reaction that causes the small red bumps and intense itching. Not only is saliva the actual factor that causes a mosquito bite to itch, it is also how mosquito-borne viruses are spread from one host to another by the female mosquito.

How should I treat mosquito bites?

While most mosquito side effects from mosquito bites can be treated at home with over the counter products, some people can experience severe allergic reactions to mosquito bites. Signs of an allergic reaction, which may occur within seconds to minutes, include sneezing, wheezing, hives, nausea, vomiting, diarrhea, sudden anxiety, dizziness, difficulty breathing, chest tightness, and itching or swelling of the eyes, lips, or other areas of the face. If many of these symptoms occur after a mosquito bite a physician should be contacted immediately.

What are the dangers associated with mosquito bites

Female mosquitoes are not only blood-seeking, biting insects. They are also estimated to be responsible for causing more human deaths than any other single cause. Mosquito-borne diseases have been a threat for centuries and as our world rapidly changes, people in tropical environments are not the only ones at risk anymore. Urban crowding, global warming, mosquito resistance to many mosquito control insecticides, and diminishing public health are all factors that have mosquito-borne diseases on the rise in the United States.

Although the life span of a mosquito varies by species, adult female mosquitoes live 2-3 weeks and in rare cases, some species live for up to 6 months. Female mosquitoes are vector agents that are capable of carrying various mosquito-borne diseases without being infected with the disease themselves. A mosquito's immune system recognizes and discards illnesses, which allows them to carry the disease from person to person throughout their life.

How can I protect myself from mosquito bites?

The best way to protect yourself from mosquito bites is to stay away from areas with high mosquito populations and avoid outdoor activities when mosquitoes are the most present. Mosquitoes like to dwell in cool, shady, heavily wooded areas, in swamps, and any other moisture rich places. Most mosquito species don't like direct sunlight so they will come out of their breeding and resting areas at dusk and at dawn to feed. If you have to go out at these peak mosquito times, wear light clothing that is a little on the thicker side, and use mosquito repellent to protect yourself from mosquito bites.

Although completely avoiding mosquitoes is virtually impossible, protecting yourself from mosquito bites, treating them, and preventing them isn't. We hope that this article has provided you with the mosquito bite protection and prevention tips that you need to gain mosquito control.